Why are rubber granules used in synthetic turf sports surfaces?

A synthetic turf sports surface needs to provide the playing characteristics the sport requires and to also ensure it provides the levels of comfort and protection players require when running, falling and sliding on the surface. It was the development of long pile (or 3G) synthetic turf surfaces in the late 1990s that contain a mix of sand and granulated rubber that encouraged sports such as football and rugby to finally consider synthetic turf as a suitable alternative to natural grass. To allow the surfaces to play like natural grass they typically have a carpet pile that is anywhere between 40mm and 65mm in length. If left unfilled this pile will lie flat, but by partly infilling the gaps between the individual pile tufts it is possible to keep them standing upright so they provide the sports characteristics bodies such as FIFA and World Rugby consider necessary. 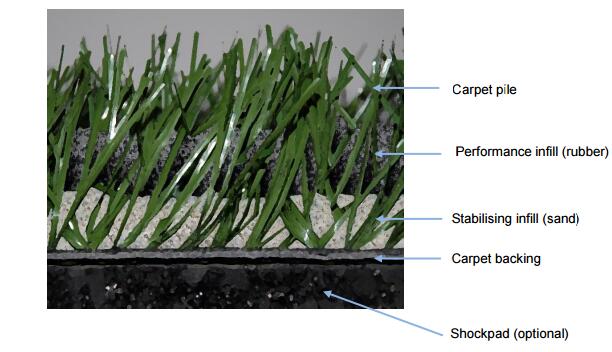 What types of rubbers are used to form the infill?

Most 3G surfaces have a layer of sand at the bottom of the infill to act as ballast and an upper layer of some form of ‘performance infill’. Since the initial development of 3G surfaces, a number of different granulates have been used including various types of rubber, thermo-plastics and organic materials such as cork and coconut fibres.

Which type of infill is most commonly used?

Of the various types of infill used, it is estimated that over 95% of all the 3G fields installed globally have performance infill derived from end of life car and truck tyres. Carpet pile Performance infill (rubber) Stabilising infill (sand) Carpet backing Shockpad (optional) Most commonly described in Europe as SBR infill (after its chemical composition - styrene-butadiene rubber) this material has very good elasticity and durability (it is

made for a far more demanding application than a sports field) and is a cost effective product as it is derived from an existing product that has reached the end of its service life.

But is SBR infill safe?

SBR infill in has been extensively examined and studied since the late 1990's. More than 100 independent and credible studies have been undertaken and these all validated the safety of synthetic turf with SBR infill. These include studies made by a number of European and North American government agencies. The US based Synthetic Turf Council has collated many of these studies and they are available on their website at (www.syntheticturfcouncil.org). Here is what a two of them conclude: “Based on the available literature on exposure to rubber crumb by swallowing, inhalation and skin contact and our experimental investigations on skin contact we conclude, that there is not a significant health risk due to the presence of rubber infill for football players on an artificial turf pitch with rubber infill from used car tyres.” (Hofstra University-Environmental and Health Risks of Rubber Infill, 2007) A comprehensive study was conducted to examine what could be extracted in biofluids from infill and turf products…and the associated risk … to children and adult athletes. Concentrations of PAHs were generally below the LOD [level of detection] for all targeted compounds…. Similarly, the metal concentrations measured in field samples indicate that the risk would be de-minimus among all populations expected to use artificial turf fields. (Brian T. Pavilonis, et al, Environmental and Occupational Health Sciences Institute, Robert Wood Johnson Medical School, 2013 Society of Risk Analysis)

There is no research that directly links exposure to SBR to cancer. In fact, a review conducted by the University of California, Berkeley is among the most comprehensive reports to date, reviewing the existing studies from the past 12 years, as well as containing independent analysis. Here are some of their findings:

“Ingestion of a significant quantity of tire shred did not elevate a child’s risk of developing cancer, relative to the overall cancer rate of the population.” (Rachel Simon, University of California, Berkeley, Review of the Impacts of Crumb Rubber in Artificial Turf Applications, February 2010) Furthermore, “regular exposure (e.g. regular play on ground rubber filled athletic fields) to ground rubber for the length of one’s childhood does not increase risk of cancer above levels considered by the state of California to be de minimus (i.e., a lifetime excess cancer risk of 1 in 1 million).” (Prepared for Rubber Manufacturers Association by Cardno ChemRisk, Inc., a global independent scientific consulting firm, August 1, 2013).

What impact does SBR infill have on the environment?

SBR infill used in synthetic turf sports pitches is an environmental success story because every year the granulate diverts many tens of millions of used car and truck tyres from landfill. The use of SBR infill also has allowed the installation of many thousands of synthetic turf pitches across Europe that are allowing children and adults to participate in sport and maintain a healthy lifestyle.

And are there any regulations covering what can be used as infill?

The performance required from synthetic turf pitches is specified by international sports federations such as FIFA and World Rugby. As these federations have a global responsibility for their sports they rely on national or regional legislation to cover aspects such as environmental and toxicological parameters. In Europe the European Union has a very comprehensive set of regulations known as the Registration, Evaluation, Authorisation & restriction of Chemicals (REACH) that covers the chemical industry and anything made from chemicals. REACH has a number of aims including:  To provide a high level of protection of human health and the environment from the use of chemicals. To make the people who place chemicals on the market

their use.) REACH applies to substances manufactured or imported into the EU in quantities of 1 tonne or more per year. Generally, it applies to all individual chemical substances on their own, in preparations or in products. All car and truck tyres sold in the EU since 2012 have had to satisfy the relevant requirements of REACH. In March 2016, the Competent Authorities for REACH also stated that rubber crumb used as infill in

synthetic turf pitches should be classified as a mixture and it needs to comply with entry 28 of annex XVII to the REACH regulations. This entry establishes a limit on the presence of substances which are carcinogenic and are placed on the market, or used by themselves, or in mixtures, for supply to the general public.

In view of recent concerns, is the anything else happening in Europe?

In view of recent media and public concern, the European Commission has asked the European Chemicals Agency (ECHA) to determine whether certain hazardous substances contained in rubber crumb infill present any unacceptable risk to human health and, if so, to advise which risk management measures it needs to take. The ECHA is expected to report to the Commission in early 2017. ESTO is actively assisting in the review by providing any technical and market information ECHA requests.

But tyre rubber granulate is from waste tyres – is that not likely to be variable?

Any product is potentially variable if its production is not effectively controlled. This is true of virgin or recycled products. With rubber products, the granulator has to contend with variability in the feedstock, whereas the manufacturer of virgin rubber products has to control the mixing and vulcanisation. How each succeeds depends on the effectiveness of their respective quality assurance systems. Leading European granulators are able to ensure that only REACH compliant tyres are used in their feedstock for synthetic turf infill. By purchasing from companies that operate robust quality management systems compliance with all relevant regulations can be ensured.

But I am still concerned, what other infill options are available?

As mentioned previously a number of other polymeric infill materials are available. As these are made from virgin materials specifically produced to be turned into infill it allows their chemical composition to be precisely controlled meaning they can meet the very highest quality standards. Ethylene Propylene Diene Monomer (EPDM) rubber and Thermo-elastic polymers (TPE) infills have been used for over 10 years and have a proven record after extensive testing and research. Consumers, when considering alternative types of rubber infill, do need to be careful, however, as recycled lower cost versions are also on the market. As they can come from applications where durability, UV resistance and toxicology are not so important

their ability to perform as an infill needs to be established. A number of ‘organic’ infills based on granulated cork or cork and coconut fibre blends are also offered by a number of suppliers. As with any infill their ability to sustain the performance required by any specific pitch needs to be thoroughly investigated before they are chosen.